Today is the last day of 2008. Some are reflecting on the year that passed by at lighting speed and contemplate the many years that have consumed them.
While others look ahead at what is to come when the clock strikes midnight and we get another chance for happiness. At least that is the way each seems each January 1st.
New Year's resolutions are meant to motivate us to do more or feel better.
Here are some suggestions:
1. Stop being afraid and do it already! (ok you may ask, what is "it"? Well, anything that you want to "it" to be!)
2. Give someone a hug everyday!
3. Seek to learn as many new things as you can.
4. Relax a little more this year.
5. Read this blog more often. (Sorry, I had to throw this one in there!)

Articles and books have graced our computer screens and store shelves with the idea that the younger generation is not loyal to their employers. This concept is very complicated and there are many things to consider. First of all, is loyalty a two-way street? Most people would say yes, that it takes two people in a relationship being faithful to make it work. Then why are younger workers expected to stay with companies when there is little chance for advancement, they are underpaid, charged too much for healthcare and generally not seen as an essential part of the team. Yes, they may receive lip service to the tune of team sacrifice and administrative support, but when it comes down to it the young professional knows that higher management would stick a knife in their back. Many people have experienced cut backs, lack of recognition and low wages in their work.

How do you define loyalty to a workplace? Is it just the act of staying in the same position or within the same company for most of your career? Maybe if we broaden our definition of loyalty to a feeling of being connected and making judgments with the company in mind as loyalty we would find that young people are quite loyal. Recently, the organization I’m associated with has cut operations hours and therefore salaries by a significant portion, increased healthcare costs and slashed the staff. They did all of this while demanding as much if not more work to be done. In spite of the company’s lack of loyalty, some members of the staff feel a twinge of guilt for leaving or searching for new opportunities. Wouldn’t this convey some loyalty on the part of the employees? They care about the success of the organization. They care about the well-being of the co-workers they know are affected by their exit. They are sad to leave even knowing it is the right decision. Are these not signs of loyalty? 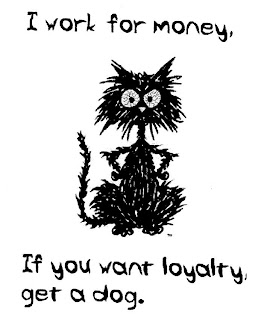 Our overall society doesn’t promote loyalty when we see CEOs receiving golden parachutes while the average worker loses their livelihood. It is getting harder and harder to move up the class ladder. They have been told this is the first generation that won’t be better off then their parents. This could perhaps inhibit some people’s motivation from working extra hard for promotions and dream jobs.

Job loyalty is not up in smoke, but it does need to be address. They young professionals, however, are not the main obstacle in this issue. In fact, they may be are greatest asset if organizations begin to tap into their skills and start showing appropriate recognition.
Posted by A.J.H. at 11:52 AM No comments:

In this economy, jobs have become a bit tricky to nab and it seems even if you have one it doesn't leave you with much in your account after rent is paid. Therefore many people are on the search for their next workplace. One of the most stressful parts of this process is the interview. Women have made incredible strides when it comes to breaking barriers in workplace leadership, but it certainly isn't far enough.

A new study exposes an old problem that is manifested in the job interview. For women the hot seat is truly burning. It is the old sentiment; a confident woman is really a bitch that just wants to destroy men and other competitive women. On the other hand, a gentle woman may be nice to work with, but would drop the ball on any important decisions that are better left up to men.
Wake up! It is nearly 2009, in the past 100 years women have won the right to vote, been Rosie the Riveter, marched on Washington, become US Supreme Court judges, ran viable campaigns for president and still managed to do well more than half of all the housework, child rearing and elder care in this world.

Women should go on strike. I’m not talking about a day at the spa! No job-related work, No dishes, No laundry, No grocery shopping, No writing, No teaching, No nursing, Nothing. It is understandable that women would be compelled to do most of this stuff for their children and it is essential they remain safe and healthy, but get those men to feed and bath the babies!

The world would fall apart. A capable woman is too much for patriarchal to handle so they must pigeon hole them into the category of bitch, frigid or outcast. So to this end I wish all the women who are job searching much luck and implore you to be yourself!
Posted by A.J.H. at 1:33 PM No comments:

During the recent Thanksgiving holiday and the upcoming holidays, together to celebrate, eat a lot of food and argue. In my household growing up political conversation was as traditional as sweet potatoes. However, I consider myself lucky because generally my family's political arguments are over who is more progressive on an issue or who has a better idea for solving world humanitarian problems. So for now, I am lucky. Perhaps someday when I have children they will turn out to be Alex P. Keatons (Family Ties) who enjoy spouting conservative jargon that will give their poor liberal mother a bleeding heart attack. Let's hope this doesn't happen, but if it does there is help. A friend recently shared an informative article about how to handle political attacks from the right. Many of the arguments the article focuses on I have heard several times.
Liberals are weak. Liberals are godless. Liberals aren't patriotic.
The article addresses reasons why these claims aren't true. There needs to be a way to get these innuendos out of the conversation. We need a campaign to show how liberals can be tough, flag waving and moral minded people. Posters with Dennis Kucinich giving the finger to Walmart while wearing a red/white/blue striped suit. The tagline could read Don't F*** with American Liberals, Bitches! Maybe? Actually, it is pretty ridiculous.
Do people really think just because you don’t want to kill other people or animals you are weak? It is commandment! Thou shall not kill, wouldn’t that include in war or state sanctioned death penalty? In addition, when did religion and being moral become synonymous because the most moral and compassionate people are know don’t follow any organized religion.
Conservative arguments are getting old, just like the white haired conservative running the government. Luckily, we are turning a corner and hopefully things will be brighter on the other side.
No matter what conversations you have with your family during the holidays, I hope it is a happy time that will be remembered for years.
Happy Holidays!


**Sorry for the delay in updating this blog, work and other chaos that occurred in November put my writing on a back burner.
Posted by A.J.H. at 11:37 AM No comments:

Check These Links Out